It’s likely you’ve scrolled through LinkedIn and seen memes that dramatise the differences between bosses and great leaders. We all want to be seen as an inspirational leader who guides and inspires people to reach the highest heights, rather than just being the person at the top of the organisational chart who barks orders. It’s natural to have the aspiration to become a better leader, but sometimes the sheer reality of business and the heavy workload can lead us (sometimes unconsciously) back to the autocratic, habits and hallmarks of being a boss.

The distinction been ‘boss’ and ‘great leader’ can have a dramatic effect on the success of your organisation. Relationships with managers are the top factor in employees’ job satisfaction, which according to McKinsey is the second most important determinant of overall wellbeing in the workplace. 75% of people say that their immediate ‘boss’ or line-manager is the most stressful part of their job. According to McKinsey, the masses of management literature out there about what makes for a good workplace points to just two critical things. One is providing employees with the context, guidance, tools and autonomy to minimise frustration and make work meaningful. The other is providing people with psychological safety — which means in simple terms that fear is not used to control, drive or manipulate employee behaviour. And effective leadership doesn’t just affect employee happiness — it trickles right down to your bottom line. Businesses with top-quartile employee engagement achieve operating profit margins 1-4% higher than those in the bottom quartile.

Throughout 2020 and 2021, we saw what was termed "The Great Resignation." This saw swathes of employees quit their jobs in reaction to what people saw as low rates of pay, unfair work practices and unrealistic job expectations, leading to burnout. There’s a good chance that a large proportion of these people worked in fear-lead organisations, ruled by ‘bosses’ rather than inspirational leaders.

So how do you define and characterise a boss vs a leader?

Leaders asks themselves “how do I make life easier for my team members?”, thinking about their physical, emotional and intellectual needs. Bosses on the other hand don’t necessarily have the skills or the incentives in place to focus them on employee happiness. Often, people are promoted to management because they are high performers or have some of the traits needed to become an effective leader. However, according to organisational psychologist Tomas Chamorro Premuzic, many ‘bosses’ get to their position by being self-centred, overconfident, narcissistic, arrogant, manipulative and prone-to-risk. The list goes on.

Bosses are associated with an autocratic “command and control” style of management and performance management principles. To them, orders are orders and there is a strict chain of command. Fear is used as a tactic to drive people to hit certain deadlines or complete a certain volume of work. In this case employee performance management is used for the wrong reasons. Employees fear the reprisals of not meeting these demands and sometimes, ‘bosses’ make an example of people, to reinforce their power and control. For a boss, it’s about maintaining a tight grip through rules and their adherence. Bosses don’t like to give people freedom and autonomy - they like to have complete and utter control and visibility on what people are working on — and how they do it. They tend to do conduct employee evaluation with the same hard-lined approach.

In contrast, effective leaders are known for encouraging and empowering their people with the carrot rather than the stick. They genuinely care for the health and welfare of their teams and are associated with qualities such as empathy, compassion and vulnerability. They have an open door and provide a safe and collaborative environment for joint problem solving. When an employee puts forward an idea for a better way of doing something, the boss might suppress this type of initiative, reminding the employee that they’re there to get the job done. An effective leader would take the idea, enable the employee to experiment and test it and then publicly praise and reward the employee. You can just imagine the culture of innovation and experimentation that this then propagates. With bosses, people feel pressured to keep their head down, “stay out of trouble” and are unlikely to feel safe enough to put ideas forward, never mind open up about a problem with their wellbeing or mental health. As you can imagine, long term this creates a closed toxic environment that people will leave when they have the chance.

Great leaders offer a curiosity, interest in people and compassion that goes beyond the level of simple business transaction. In fact, research shows that when employees perceive compassion or kindness from their leaders, they become far more loyal. It’s not just about being compassionate to your people. It’s about opening yourself up to their empathy and compassion which requires a willingness and genuine ability to feel and show vulnerability. To be clear, we’re not for a second saying that you should gather in a circle and have a ritual crying and “why we love each other session” — but by showing your real, human self (instead of a fake persona taken from a management self-help book), you have the power to transform the quality of your relationships with each and every person.

The next quality of great leaders is that of real and unwavering gratitude. Being thanked makes people feel valued. If you’re a boss, you might have the opinion “we’re doing you a favour by employing you — so be thankful for every hour that you are able to work.” A great leader on the other hand makes people feel valued and valuable, allowing them to take credit for their work (documenting it in the performance appraisal system) and sharing that sense of achievement across the team and wider organisation. But beware — people are savvy to management fakery. We all have a hyper-sensitive innate radar that can separate real gratitude from less sincere verbal exchanges.

Finally, effective leaders focus on creating an incredible culture of positivity and optimism. Bosses might focus on what went wrong and ‘who was responsible?’. Leaders focus teams around small wins, allowing them to collectively discuss the wins and losses (and positives and negatives) with an emphasis on learning and continuous improvement. Catching people doing the right thing and documenting this in your performance management system gives people positive feedback that they can build on, encouraging them to reach for the stars when it comes to furthering their career. That’s far more positive and motivational that focusing on any kind of negativity.

Ultimately, leaders act as role models, living the values of the organisation and setting a positive example that drives the behaviours (and business outcomes) that mark success within the business or organisation. Nobody is born a fantastic leader, so don’t be overly hard on yourself. Leadership qualities are something that can be learned and developed over time. So no matter whether you currently see yourself as a great leader or a boss, think about how you can become more self aware and how you can slowly but surely change your management style, shaping company culture in the right direction. 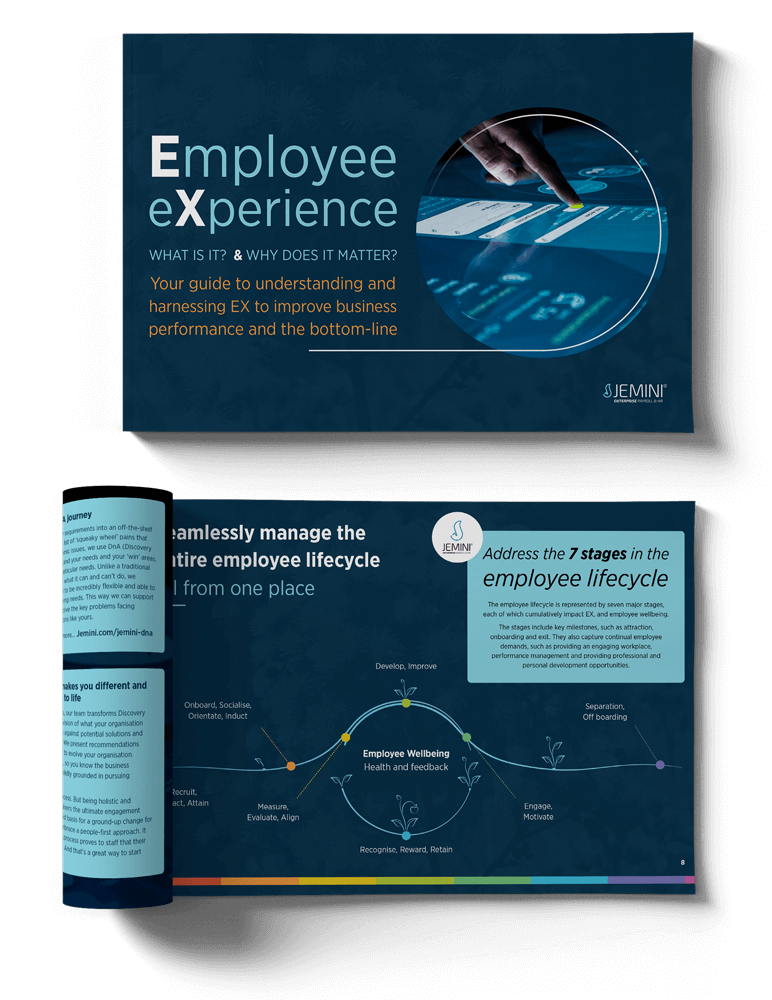 A guide to Employee Experience

What is it and why does it matter?

eBooks and guides to help you master employee engagement.